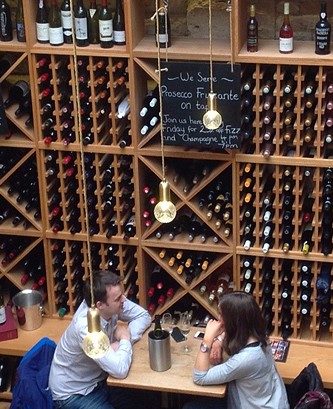 That’s right, not only did the Romans invent concrete, sewers, roads, the calendar, the newspaper and underfloor heating, but they even invented the toast! And who would have guessed that it actually involved real toasted bread! It apparently originated when the Senate made it a requirement that emperor Augusts be honoured with a toast at every meal. They would drop a piece of burnt toast (known as the tostus) into a glass of wine to disguise the wine’s disagreeable flavours and then raise a glass to the guest of honour.

The Speyer wine bottle was uncovered in Germany in 1867 and is believed to be from 325 AD! If this is correct, it is the oldest known unopened bottle of wine in the world. The bottle was discovered during an excavation within a 4th-century AD Roman nobleman’s tomb. One source says the man was a Roman legionary and the wine was a provision for his celestial journey. We know wine is meant to improve with age but we think you might be better off missing this one out if someone starts handing out glasses of this wine!

The world’s oldest bottle of wine might be almost 1,700 years old, but scientists have recently revealed that they have found pottery fragments which show the earliest evidence of grape wine-making. The fragments are believed to be 8,000 years old and were discovered in two Neolithic villages, called Gadachrili Gora and Shulaveris Gora. The world’s earliest non-grape based wine is understood to be a fermented alcoholic mixture of rice, honey and fruit dating back to 7,000 BC in China.

Egypt dominated the wine trade between 1550 and 1070 BC, and the Egyptians went about improving it as much as they could. They first created amphorae to make the transportation of wine easier and then they created the wine label. It seems that the 19-year-old King Tut was a fan of the alcoholic grape-based beverage as there were 26 amphorae found in his tomb alongside a wide array of other artefacts. The amphorae were all labelled with extremely specific details regarding the year the wine was made, where it was made, who made it and even the style of wine. They had a rating system of good, great or excellent wine (does this mean they never made a bad bottle?). We wonder if they could have done with some wooden oak wine racks, as the amphorae don’t seem to be very neatly placed!

This uncommon fear is called Oenophobia and is the irrational fear of wine. People with Oenophobia have a paralysing fear of seeing the consumption of wine, wine bottles and spilt wine. The disease is related with methyphobia (fear of alcoholic beverages). In both of these cases, the person with the phobia often dislikes these alcoholic drinks as they are afraid that they may suffer severe poisoning when consuming them. Even the idea of this can cause extreme anxiety, tremors, respiratory problems, abdominal pain and nausea.

The Perfect Wine Cellar – Part 1
What are the Health Benefits of Drinking Red Wine?
How is Wine Made? A Brief Overview of the Wine-Making Process
How to Read a Wine Label
The Evolution of the Wine Cellar

Delivery Charges £22.50 (England & Wales). Orders over £350 delivery is included (England and Wales Only)